Nigeria’s tech industry is rising up against what its leaders say is a campaign of police harassment and extortion of tech workers after the alleged arrest of a software developer went viral.

The #StopRobbingUs campaign launched on Sunday after Akinmolayan Oluwatoni, a developer at Buffer Media in Lagos, tweeted that members of the city’s Special Anti-Robbery Squad had stopped him while he was carrying a laptop and iPhone and taken him to a police station where they demanded ₦1m ($2,759) to release him.

“Next thing was slaps and punch, here and there. All I could hear was confess you’re [an] internet frauster [sic] or not? I kept saying I’m not a fraudster, I’m a developer for a company and all,” he wrote. He said he had paid ₦15,000 to be released.

Lagos’s tight-knit tech community quickly responded, with scores of other developers posting similar stories about being accused by police of being “Yahoo boys”, a nickname for internet scammers.

A Nigerian police spokesman declined to comment, but the force’s complaints department said on Twitter that an investigation had begun. Local media reported that four officers had been arrested on suspicion of extorting Mr Oluwatoni.

Tech investors said the arrests were a worrying trend that “accentuates the talent drain” in Africa’s largest economy.

“This is a country where we’re complaining about lack of jobs, and this is a sector that is creating jobs,” said Bosun Tijani, co-founder of CcHub, the Lagos tech incubator, referring to the fact that roughly half of young Nigerians are unemployed or underemployed.

You need to nurture this bright spot in the broader Nigerian story, not suppress it and definitely not make young people think they can’t travel in most parts of Nigeria with a laptop without feeling safe

He said that the Nigerian police extorted citizens of all stripes, but software developers were subject to a specific, gadget-driven type of shakedown that police used to frame them as “419” fraudsters, so-named after the police code for internet crimes.

“They target anyone they find with a mobile phone or a laptop that is too good, because they think these are the tools that the 419 folks use,” said Mr Tijani. “It becomes very difficult, because for software engineers, these are their tools — a lot of the companies in Nigeria will buy you a MacBook. So if a police officer sees you with a MacBook he automatically thinks it’s too expensive for a young person to be carrying around, even though it’s for your job, and he uses that as an excuse to extort you.”

Mr Tijani and the others behind the campaign have collectively raised hundreds of millions of dollars in venture funding and turned Lagos into the most valuable start-up ecosystem on the continent. They have raised more than $30,000 in the first 24 hours of a crowdfunding campaign for a potential class action lawsuit and public awareness campaign. 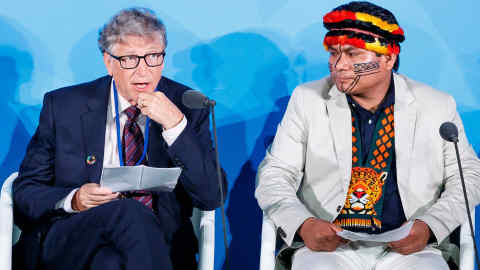 Mr Oluwatoni said he had previously been harassed by police while carrying his MacBook, while his brother had been stopped for playing Clash of Clans on his phone. But on Saturday, he said police stopped him because they saw his iPhone. “If they see you with a Mac it is bad — then with an iPhone, it’s terrible, terrible,” he said.

Rather than leave his laptop or iPhone at home, as some Nigerian techies have suggested they do, Mr Oluwatoni said: “The best thing now is just to leave, to just leave Nigeria, because it’s just getting too rampant — if I didn’t have money to give those guys, god knows what they would have done.”

Jason Njoku, founder of iROKOtv, the so-called Nigerian Netflix, which has raised over $40m, said the shakedowns risked tarnishing a rare highlight of an otherwise largely moribund economy.

“You need to nurture this bright spot in the broader Nigerian story, not suppress it and definitely not make young people think they can’t travel in most parts of Nigeria with a laptop without feeling safe,” he said.

Microsoft is in talks to buy TikTok

Plentywaka Raises $300,000 Pre-seed Fund to Expand its Operations into Abuja

#COVID-19: “We Have To Plan To Produce Protective Gears Locally”- Dr...

infodig - August 9, 2020
0
A medical practitioner, Dr Doyin disclosed a lot of effects of Corona Virus on Nigeria's health and socio-economic sector. In the exclusive onlone...

Nigerian Armed Forces and the limit of politics

As doctors, we know the Nigerian travel ban is cruel. Now it’s personal